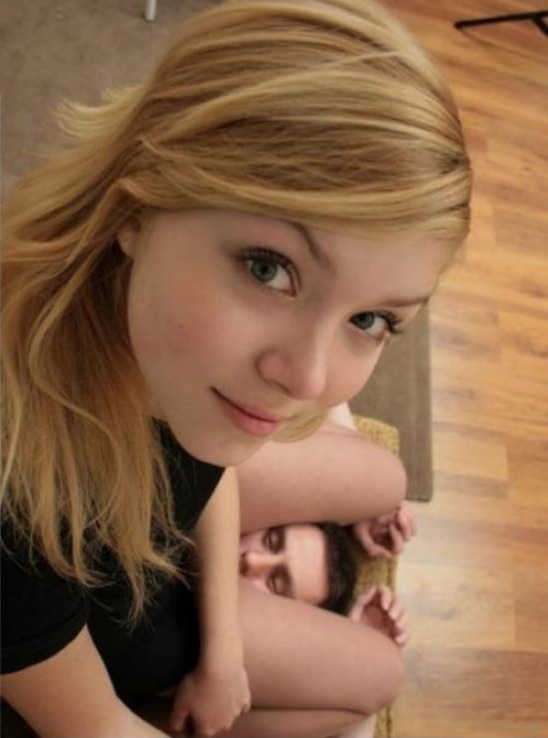 "Yeah do you like it when I grind my pussy into your face faggot?" Stacy put all of her weight on me, cutting off my airflow. Her legs pinned my arms to the ground above my head making it impossible to get enough leverage to lift her off of me. She continued as my need for air became more pressing. I tried to say "stop", but all that came out was a muffled yell. She just giggled and looked down at me with a devilish grin on her face.

After what felt like an eternity Stacy shifted her weight and I began to gasp for breath. She sat back on my chest and, grinning, began to massage her clitoris. This type of domination was the only way that Stacy could achieve sexual gratification. Sex did nothing for her, she needed to feel that she held a man's life in her hands.

After I had caught my breath for a moment I said to her "I don't understand why this pleases you. You know that at any time I could pin you down and have my way with you, your domination is entirely dependent on my willing subservience. Doesn't that knowledge ruin your pleasure?"

Stacy looked at me for a moment before walking over to a chair and sitting down with one leg crossed over the other. I sat up and she began "Listen Justin, you have a fundamental misunderstanding of power. There are two types of power: potential and actualized. You have the potential to physically dominate me but because you do not exercise this power it means nothing. Power only has value when it is utilized. For instance, the American people have far more privately owned weapons than their military. They could form an army tens of millions strong and completely overwhelm their government's defenses. However the American people still believe in their noble lie; they will never risk their 'American Dream' for the slim chance of a better government. Thus their government has not made any serious efforts to disarm them and rock the boat. Instead it pours its efforts into maintaining the illusion of a better future and keeping its citizenry sedated. If their power had any value their government would not have been able to perpetrate such a long train of abuses against them. By contrast their politicians hold very little power but because they exercise it to the greatest extent possible it appears much greater than it is. Americans are often angry at their representatives but year after year they reelect them; lamenting all the while about how bad things are."

"You are also incorrect about my source of pleasure. Dominating you does nothing for me; I am intoxicated by pushing you towards the cliff of actualization, seeing how close I can push you, edging further and further towards the abyss, thinking that you really might get up and slap me around if I push just a moment longer, that you might push me down and do the same to me ten times over... mmmh."

I noticed that she had been rubbing her legs together towards the end of her lecture. Now she got up and walked back over to me, pushing me back and sitting on my chest once again. She was taking short, heavy breaths. "Now that you know, I wonder how far I can push you? Will you stop quickly or will you hold out longer than ever?" Her cheeks were flushed and I could feel a wet sensation on my chest. As she brought herself forward once again I took a deep breath and resigned myself to my fate.